Thank you dear subscribers, we are delighted with your response.

Your Turn is a unique section of ThePrint featuring the perspectives of its subscribers. If you are a subscriber, have a point of view, please send it to us. Otherwise, subscribe here: https://theprint.in/subscribe/

In July 2021, a cabinet reshuffle gave place to most Indian states in the central ministry. Will it, however, remedy the political and economic disparities that exist between Indian states?

The results of the recent state assembly elections (Assam, Puducherry Tamil Nadu, Kerala and West Bengal) have prompted us to reconsider India’s current state of imbalance. Of the 30 states and Union territories with legislative assemblies (except Jammu and Kashmir, which has yet to hold elections), 19 are governed by the BJP and its allies, and 11 are led by non-BJP parties.

Figure 1: State and Union territories with legislative assemblies in 2021 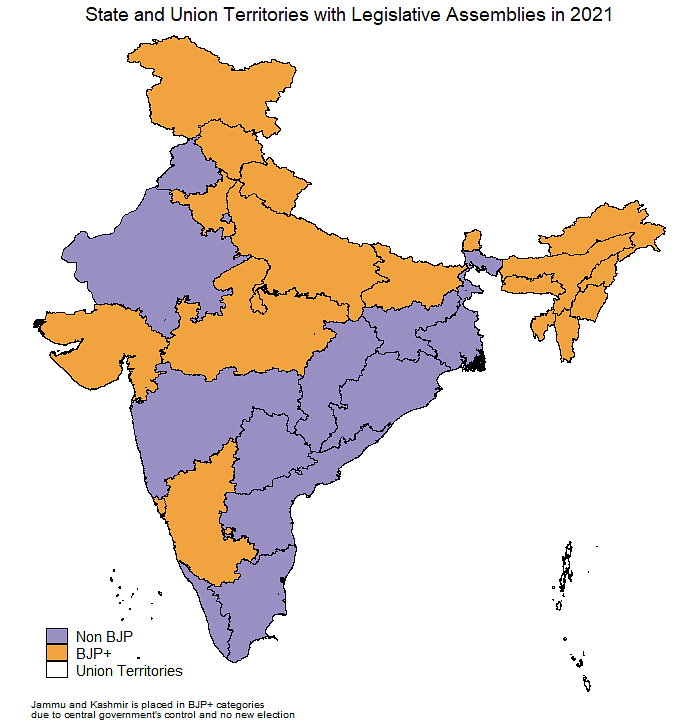 Non-BJP parties are in power in the southern states, with the exception of Karnataka, following state assembly elections in Tamil Nadu. The BJP and its allies, on the other hand, rule the majority of northern states. In terms of state assembly, geographic mapping implies a North-South divide.

Besides the political imbalance, India is also experiencing a regional income imbalance. In 2018-19, the per capita net domestic product of Bihar and Uttar Pradesh was Rs 29,668 and Rs 44,421, respectively, while that of Kerala and Tamil Nadu was Rs 148,078 and Rs 142,941. Its value is approximately triple. 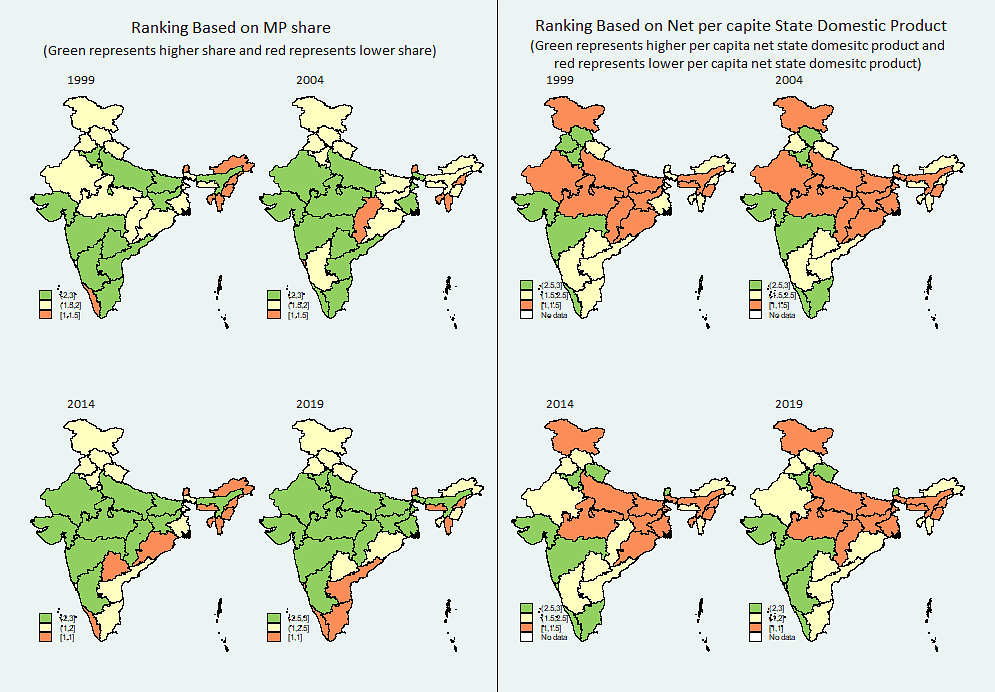 The north-south divide is highlighted by the spatial mapping of economic and political power. Political power is concentrated in the north, while income is concentrated in the south. The gap is widening. This forces us to reconsider economic geography, a concept popularized by the World Development Report 2009. Density, distance and division are the three fundamental building blocks of economic geography. This includes the human (elements of human development, including density, labor productivity), physical (elements related to market development, access) and political aspects of economic development. The population (density) is concentrated in northern India, while southern India has traditionally benefited from efficient market access due to its proximity to the coast and sea routes. Further south, states like Kerala and Tamil Nadu have established good public transport systems, reducing economic distances. On the other hand, the political divide between North and South is widening. Imbalances in all three aspects can pose challenges for policy makers.

The recent cabinet reshuffle has given room for most Indian states in the change of central ministry. Uttar Pradesh had eight ministers, while Gujarat had six. Maharashtra (4), West Bengal (4), Bihar (3), Karnataka (3), Madhya Pradesh (2), Odisha (2), Assam (1), Himachal Pradesh (1), Uttarakhand (1), New Delhi (1), Rajasthan (1), Tamil Nadu (1), Jharkhand (1), Telengana (1), Tripura (1), Arunachal Pradesh (1), Arunachal Pradesh (1) and Manipur (1) all have representation at the central ministry. Will this, however, balance current regional disparities in policy and income? This will be the most crucial issue of Indian quasi-federalism in the near future.

Where are we going as a Nation?

There has never been, is or never will be a utopia; we can only work towards one. I am writing this without singing hymns to the Chinese system or to liberal democracy. I just paint a few scenes as we see them.

I come back briefly to the evolution of Homo Sapiens to understand politics and society. Bands of nomads with and without pack leaders, human civilization has seen various forms of government – leaders, kings, emperors, fascists, communists, autocrats and finally democracy. Democracy can safely be called the most successful of systems. Even with localized conflict and terrorism in the world today, the postwar era has been the least damaging of systems. I do not go into details. You can read all of this on the net, if you are interested.

Yet liberal democracy has different meanings for different sections of the electorate. The economist sees free trade and globalization in it. A politician will see the rule of law, free and fair elections, the rights of minorities and others. The common man will see same-sex marriage, individual rights, broad choices, etc. It is a complex system to say the least, especially in a divergent population, as in India. Then there are always two sides to what a nation does or does not do – national and international.

Under these circumstances, how pervasive and successful can liberal democracies be?

According to Yuval Noah Harari, the real problem with democracy, good or bad, is that “elections are about what we feel and not what we think ”. Politicians and the media by their words channel our feelings. This addiction to feelings can be the collapse of liberal democracy in India and around the world, which still has today degenerated into a “puppet show controlled by emotional threads”. Governments, the media and all other constitutional bodies are afraid to tell the people to behave, lest the the voting base is eroded. The results are all too obvious in these times of pandemic !!!! Feelings are not a cosmic force and they surely do not reflect any free spirit. i wonder where democracy is thoughtless even though there is a danger lurking even there. The most of we, including much of the media, think they think when in reality the “thinking ”only rearranges prejudices. This is also demonstrated in the opinion writings of journalists, columnists and many experts.

China has found a mixture of various systems to emerge economically and militarily. It follows a variation (single party in charge) of an autocratic system internally and liberal democracy at the international level. In medieval times in the regions of China and Mongolia, the invaders first claimed small portions of isolated villages before launching large large-scale offensives. In today’s world, the battleground is actually the economic spectrum rather than the geographic extent. The military posture as posed by China, along the LAC and other parts of the world, is just a smokescreen. He quietly bites into the world economic pie. China knows what it is doing. His strength is that he can just go ahead and do whatever he wants. We may not know the exact internal situation in China. Yet the only way China can now be contained is for its people to be so unhappy that they revolt and the Chinese nation implodes. That may not arrive anytime soon as the the political structure there reduces the possibility of a strong concerted uprising by Chinese citizens.

The democratic system certainly offers more freedom than governments like in China. The problem is that we, as a Nation, do not see that increasing freedom also comes with increased responsibilities. Searching for loopholes in the system for gains is not something that can be held responsible. Neither wears a helmet only when confronted with traffic police. The citizens of democracies must be more disciplined than in any other system of governance.

Even in a democracy in many areas, the nation needs to speak with one voice. It cannot happen when every political group speaks against the grain with a parish program on anything and everything. The media too must be consistent and truthful in their reporting. A nation cannot be ruled by the judiciary, just because it is a democracy and anything and everything can be challenged in the courts.

Cordier: As Yuval Noah Harari says: “Most of the problems we face today in liberal democracies are there because people who work for a living now outnumber those who vote for a living” . In this sense, how is China different from a democracy – except that in a democracy the ruling parties change periodically.

These parts are published as received – they have not been edited / verified by ThePrint.

India is all the more in need of free, fair, non-hyphenated and interrogative journalism as it faces multiple crises.

But the news media are in a crisis of their own. There have been brutal layoffs and pay cuts. The best of journalism is shrinking, giving in to crass spectacle in prime time.

ThePrint employs the best young reporters, columnists and editors. Supporting journalism of this quality requires smart, thoughtful people like you to pay the price. Whether you live in India or abroad, you can do it here.

Liberal democracy is still under threat

Should we rethink liberal democracy?

The fate of liberal democracy in troubled times